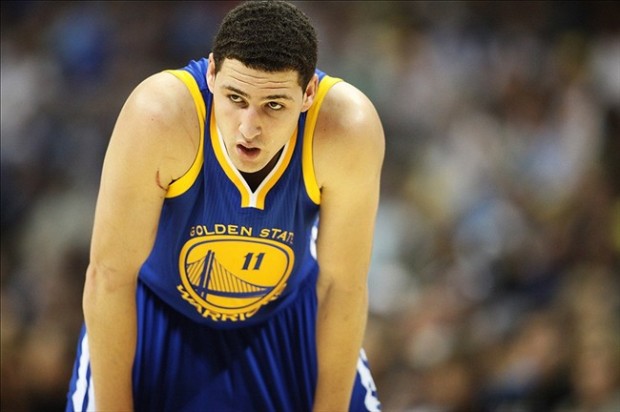 Klay Thompson had a solid sophomore season for the Golden State Warriors last year. He played in all 82 games, and he averaged 16.6 points, 3.7 rebounds, 2.2 assists, and 1.0 steal on 42.4 percent shooting, 40.1 percent shooting from three, and 84.1 percent free-throw shooting.

As many Warriors fans know, Thompson is known for his three-point shooting, but he’s started to show that he’s not just a catch-and-shoot player. Thompson has shown that he can create his own shot off the dribble, off a fadeaway, and off a pump fake from two-point range and from three. He doesn’t often need to do this though because of his perfect form and quick release of his jump shot.

Also, in Game 2 in the Western Conference semifinals series against the San Antonio Spurs, Thompson had 34 points and 14 rebounds on 50 percent shooting and 88.9 percent shooting from three.

Thompson and Stephen Curry, the Splash Brothers, create quite the three-point shooting tandem for the Warriors. They are both so lethal from three-point range that it creates all kinds of matchup problems for their opponent, and it’s hard to contain both of them in one game. The Splash Brothers were arguably the best shooting backcourt in the NBA last season.

Last season, Thompson expanded his game beyond just being an excellent shooter. Thompson became the Warriors’ best perimeter defender. He uses his size (6’7″) and length so effectively, in order to stop smaller guards from shooting mid-range jumpers or driving into the lane. Thompson shut down Ty Lawson in the series against the Nuggets, and he also did a fantastic job slowing down Tony Parker and bothering Manu Ginobili in the series against the Spurs.

Going into his third season in the NBA, Thompson still has room for improvement though. First of all, he needs to become more consistent. After his miraculous Game 2 against the Spurs, he shot 34 percent from the field for the rest of the series, and, in games 4-6, he failed to make a three-pointer.

Also, on the defensive end, he needs to be more consistent about limiting his fouls. In Game 1 of the Western Conference semifinals against the Spurs, the Warriors were up by 16 points and Thompson fouled out with 3:57 left in the fourth quarter. At that point, Thompson had limited Parker to 12 points on 4-of-15 shooting. The Spurs then went on a 18-2 run to send the game to overtime. In that span, Parker scored six points on 3-of-3 shooting, since he was able to score more freely without Thompson guarding him. Thompson needs to find a way to stay on the floor and limit his fouls.

Second, Thompson can improve on attacking the basket more and finishing. There were several times last season when Thompson would drive to the basket and would miss a fairly wide-open layup, which fans stared to call a “Klayup.” It didn’t appear that Thompson had trouble getting to the rim, but he couldn’t always finish. Thompson needs to use his quickness more to attack the basket, because as he converts on more of those shots, it will cause defenders to lay off him a little more on the three-point line, in order to prevent him from driving to the basket. Once he’s more comfortable with that, hopefully, finishing the play will become easier.

If Thompson can become more consistent on offense and defense, limit his fouls, and drive to the basket more often and more effectively, than he will become one of the Warriors’ best players, alongside Curry. His development is key to the Warriors’ success.