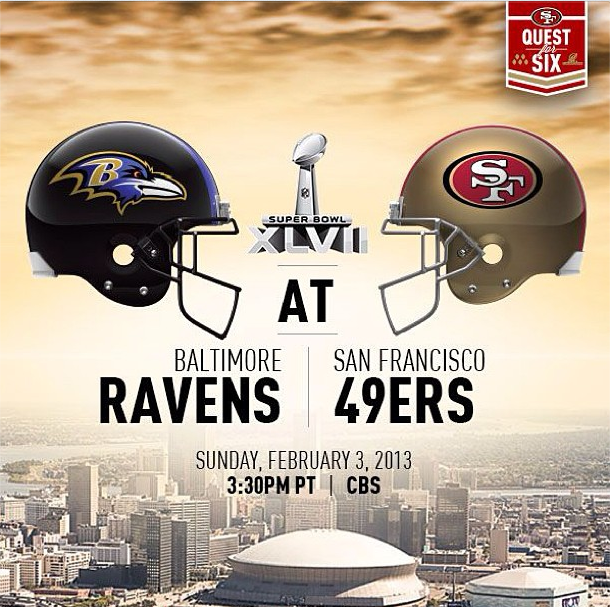 The stage is set for Super Bowl XLVII. Harbaugh vs. Harbaugh. West Coast vs. East Coast. 49ers vs Ravens. It’s going to be quite a show. The Niners are a storied francise with a history full of Hall of Famer quarterbacks, and who, as of recently, are being led by just a second-year quarterback. The Niners, who have five Super Bowl titles in their history (tied with the Dallas Cowboys for the second-most in NFL history), are also the only team in NFL history to appear in at least one Super Bowl without ever losing. The Ravens are a team with much less NFL history, as they started playing in 1996, compared to the Niners who were founded in 1946. The Ravens beat the New York Giants in Super Bowl XXXV, which makes them one of four NFL teams to win in their sole Super Bowl appearance. The Ravens have also been AFC North Champions four times and have made the playoffs a total of nine times since 2000. Super Bowl XLVII is bound to be a dramatic one.

This Super Bowl will be known as the Har-Bowl. John Harbaugh, the older brother, is the head coach of the Baltimore Ravens, and Jim Harbaugh is the head coach of the San Francisco 49ers. When Jim Harbaugh was named the head coach of the Niners in 2011, the two Harbaughs became the first pair of brothers to serve as coaches in NFL history. John Harbaugh has been the head coach of the Ravens since 2008 and was previously the Special Teams Coordinator and Defensive Backs Coach for the Philadelphia Eagles from 1998-2007. Jim Harbaugh was the Quarterbacks Coach for the Oakland Raiders in 2002, but other than that, his coaching experience was limited to college football with University of San Diego from 2004-2006 and Stanford University from 2006-2010. However, he played quarterback in the NFL for 14 seasons and went to the Pro Bowl once. Their father, Jack Harbaugh, also played quarterback in college and coached at several different colleges. Their rich family history in football and the brotherly rivalry will surely provide some extra excitement to this Super Bowl.

The Niners had a 11-4-1 regular season record and were known as one of the best defenses in the league. In the regular season, the Niners’ defense was third in the NFL for yards allowed per game with 294.4 yards. The Niners were also fourth in passing yards allowed per game with 200.2 yards, and they were fourth in rushing yards allowed per game with 94.2 yards. Their offense features a strong rushing attack, a Pro-Bowl tight end in Vernon Davis, and an up and coming wide receiver in Michael Crabtree. Alex Smith was originally the 49ers’ quarterback, but after suffering a concussion in week 10, Kaepernick took over in Week 11. Even after Alex Smith recovered from his concussion, Harbaugh decided to continue to start Kaerpernick. To see why Harbaugh decided to keep Kaepernick as the starter, click here. The Niners have gone 7-2 since Kaepernick was named the starter, and they have played an exciting brand of football ever since. Kaepernick hasn’t shown his lack of experience thus far, so we’ll see how he can respond in a high-pressure situation like the Super Bowl.

The Ravens had a 10-6 regular season record and had to overcome several injuries to key players this season, including the future Hall-of-Famer, Ray Lewis. Lewis, playing in his 17th season with the Ravens, tore his triceps midway through October. The Ravens had to play without their star linebacker and team leader for a majority of the season, yet they continued to have an impressive season behind their quarterback Joe Flacco and Ray Rice, one of the best running backs in the league. Lewis returned from injury for the Ravens’ AFC Wild Card game against the Colts, and before the game, he announced that he would retire at the end of this season. The Ravens have been known to be the underdog this season. They came in as serious underdogs in the divisional round against the Broncos, and they won 38-35 in double overtime. They came into the AFC Championships against the Patriots even more as underdogs, and they were able to pull off a miraculous 28-13 win. The Ravens will for sure come into the Super Bowl with a tremendous amount of passion given their underdog mentality and the fact that it’ll be Ray Lewis’ last game in the NFL.

Joe Flacco and John Harbaugh after the AFC Championship

Initially, the 49ers are favored by 4.5 points over the Ravens to win the Super Bowl. However, the Ravens are used to being named the underdog. The Patriots were favored by 7.5 points over the Ravens in the AFC Championship, but the Ravens won by 15 points. The Ravens might even enjoy playing as underdogs, because they seem to like proving people wrong. There will be much emotion swirling around this game, so both the 49ers and Ravens will have to be prepared for the distractions, obstacles, and high stakes. This Super Bowl will most likely be a back-and-forth battle and it’s going to be a close game, no matter who wins. So who will win? The token underdogs, the Ravens, or the defense-oriented, newly-rejuvenated offense of the Niners? I guess we’ll see on February 3rd in New Orleans.