The first game was on November 3rd, 2012 in Los Angeles. It was the only the third game of the season, and the Warriors were 1-1 going into the game. The Warriors were a very different team back then. Andrew Bogut was resting his ankle this game, and the Warriors had just lost their sixth man, Brandon Rush, for the season with a torn ACL. The Warriors rotation was a little different back then. First of all, Festus Ezeli started his first game of the season, three games into his rookie year. Also, Andris Biedrins didn’t play at all this game, meaning the Warriors went small for the majority of the game, Charles Jenkins didn’t play any minutes either, Draymond Green played only five minutes, and Richard Jefferson played 22 minutes. 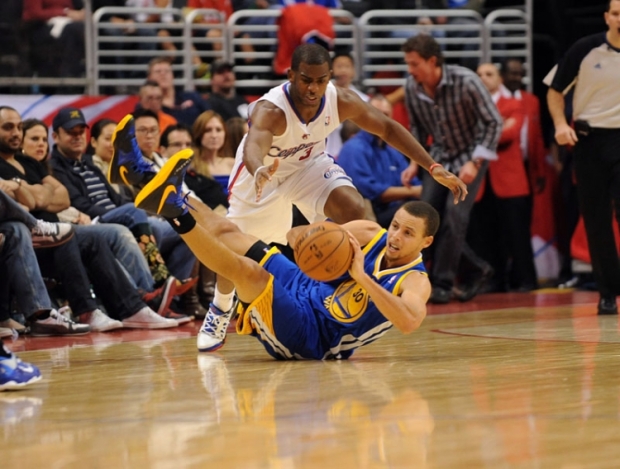 The Warriors led by as many as 14 points at a couple points in the game, but it was mostly a close game throughout. Fans were able to see intial signs that the Warriors were improving. First of all, the Warriors won the rebounding battle 48-33 and held the Clippers to 42.9% shooting, which was a good sign since rebounding and defense were always the Warriors’ problems. In addition, Stephen Curry took a charge on a Chris Paul drive to the basket that would have tied the game with 7.5 seconds left. Curry hasn’t been known as an elite defender, but starting in this game, he has shown signs of much improvement on defense. Curry then made two free throws with 6.9 seconds left that sealed the 114-110 win for the Warriors. Curry finished the game with 23 points and 4 assists. The Warriors also got a huge performance off the bench from Carl Landry, who had 23 points and 10 rebounds. Klay Thompson also chipped in 17 points and 8 rebounds. After the game, Mark Jackson said, “We don’t quit. We had every reason to quit, but we gutted it out and we defended. It was just a great win for us. I am extremely proud of my guys.” The Warriors determination and constant effort are traits that were developed early on in the season and have continued to grow since. To read more about how the Warriors have improved this season and how they never give up, click here.

The Warriors and Clippers met again on January 2nd, 2013 in Oakland. Oracle Arena was hosting a “Whiteout” that included all fans wearing white shirts, a snow machine outside of the arena, and several other displays of the holidays. It surely was a festive night at Oracle Arena, but in addition to the holiday spirit, the fans spread around their excitement for the game, which caused a playoff-like atmosphere at Oracle Arena for the first time since the “We Believe” playoffs in 2006-2007. The rotation now included Biedrins, Jenkins, Green, and no minutes for Jefferson. Bogut is out until his ankle is fully healed, so Ezeli is still the starting center as well.

The Warriors started off the game on fire, which led to a 26-8 lead. The Warriors had three days off prior to the game and appeared fresh and aggressive from the beginning of the game. The Clippers were playing their second game of a back-to-back and appeared a little worn out early on in the game. The Warriors’ biggest lead of the game was 24 points, and they built this lead because of their excellent 3-point shooting, great defense, and rebounding. The Warriors shot 52.2% from the 3-point line compared to the Clippers shooting only 27.6% from the 3-point line. The Warriors also played great defense, holding the Clippers to 36.2% shooting, and they won the rebounding battle yet again 53-38. Curry made 9 of his first 10 shots, and scored 25 points in the first half, the most points by a Warrior in a half this season. He finished the game with 31 points, 8 assists, and 6 rebounds. David Lee had another spectacular game and finished with 24 points, 13 rebounds, and 7 assists. Klay Thompson also had 19 points and was 5-9 from the 3-point line. The Warriors won 115-94.

The Clippers have two All-Stars in Chris Paul and Blake Griffin, but the Warriors have a point guard and power forward who both also have strong cases for making the All-Star team this year. Stephen Curry is finally healthy, and he’s had a phenomenal season averaging 20.4 points, 6.5 assists, 4.5 rebounds, 43.6% shooting, 45.6% shooting from the 3-point line, and 89.5% from the free throw line. Only two other players in the NBA average at least 20 pints, 6 assists, and 4 rebounds. Those two players are LeBron James and Russell Westbrook, who are both All-Stars. Curry also has several 20 points-10 assists games. David Lee is basically a double-double machine, and he averages 20.2 points, 3.7 assists, 11.1 rebounds, 53.8% shooting, and 82.4% from the free throw line. He was named the Western Conference Player of the Week from Monday, December 10 to Sunday, December 16th. He also posted seven straight games, the whole seven-game road trip, with at least 20 points and 10 rebounds. Mark Jackson discussed why Curry and Lee should be All-Stars this year after Wednesday’s game and he said, “[Curry] has been great. The guy’s an All-Star. Maybe I’ll hold my own game if these two guys [Curry and Lee] aren’t in there. Maybe that’s the answer, but these two guys are All-Stars. Steph Curry played Chris Paul and it looked like two of the best in the business going at it. It was great, because what happens is, the rest of the guys realize, we’ve got a guy at the head of the snake that’s not backing down, and it breeds confidence and breeds life.”

In addition to the All-Star matchups that we’ve seen in these games, we’ve started to see why the new must-see rivalry in the Pacific Division is between the Warriors and the Clippers. Although the Clippers made the playoffs last year, both teams entered the season very much underrated by the rest of the league, especially the Warriors. No one expected the Warriors to be 22-10 at this point in the season. The Clippers went on an unbelievable 17-game winning streak, but they have now dropped two straight games, and their record now stands at 25-8. These two teams are actually fairly similar though. The Clippers rank 3rd in the NBA in opponent field-goal percentage, and the Warriors rank 4th. Both teams have great bench support, although the Clippers have more experience on their bench. Both teams have incredible talent in the point guard and power forward positions. The Clippers have more experience in the playoffs though. The Warriors and Clippers meet again this Saturday night in Los Angeles, and the Clippers will want revenge. The Warriors will be prepared though. David Lee said after Wednesday’s game, “They’re going to be ready. They’re a team that has a lot of character and a lot of guys that don’t like to lose. They’ve won a lot of games in a row and they’re going to be ready and we’re going to be ready as well, we’re excited to go back down there for this challenge.” This will for sure be an interesting and exciting rivalry throughout the season.