The 2012 All-Star Game MVP, Melky Cabrera, has been suspended without pay for 50 games for taking performance-enhancing drugs. According to CSN Insider Andrew Baggarly, Cabrera tested positive for testosterone sometime during the All-Star Break, but the Giants weren’t informed of the suspension until yesterday before the final game of their three-game series against the Nationals. In a statement released by the player’s union, Melky Cabrera said, “My positive test was the result of my use of a substance I should not have used. I accept my suspension under the Joint Drug Program and I will try to move on with my life. I am deeply sorry for my mistake and I apologize to my teammates, to the San Francisco Giants organization and to the fans for letting them down.” Cabrera will miss the remainder of the season and the first five games of the postseason, if the Giants make the playoffs. However, if the Giants make it to the National League Championships, the timing of the end of his suspension will affect if he will be able to make the final playoff roster, since that is when he could be eligible.

Cabrera was having an MVP-like season while leading the National League in hits with 159 and was second in batting average, behind Pittsburgh Pirate Andrew McCutchen, with .346. He also had 11 home runs and 60 RBI’s. Cabrera showed off his fantastic throwing and accuracy in left field on numerous occasions for the Giants. Despite the offensive and defensive prowess that Cabrera has displayed so far this season, Giants fans will miss their everyday left fielder and newfound hero. The “Melk-Man” became a fan favorite almost immediately, and many fans hoped that the Giants would be able to re-sign Cabrera in the offseason. 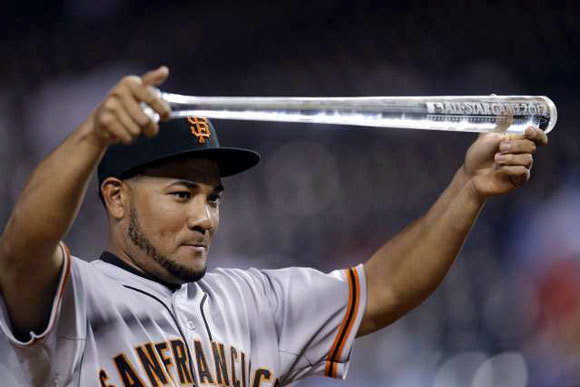 Cabrera’s future with the Giants is now in question. After the Giants traded for Hunter Pence, Giants GM Brian Sabean said that they would still have cap space to try to re-sign Cabrera in the offseason. Given the current circumstances though, it seems unlikely that the Giants will re-sign Cabrera. Although he is a beloved figure by Giants fans, Bochy and Sabean might find it too risky to re-sign him, and, frankly, not trust him anymore. When asked about the likelihood of bringing back Cabrera next season, Bochy said he couldn’t answer that question yet. “This guy is a really good player, and he’s a good person,” Bochy said. “These are questions I can answer a little bit later, but not right now.”

The Giants have had unfortunate luck with drug suspensions this season with this one being their second. Guillermo Mota was suspended in May for 100 games, and this was his second drug suspension in his career. Buster Posey said of the Giants’ latest drug suspension, “Ultimately it’s just a bad decision, and that’s all I’m really going to say about that.” Clay Hensley said, “It’s tough, because you don’t know what’s going through someone’s head. He’s going to suffer the consequences, and we’ve got to move on. But he’s a big bat, so that’s easier said than done.”

It’s a little unclear and quite suspicious when exactly the Giants found out about Cabrera’s drug use because of the timing of his drug test and then later his suspension. The Giants were talking to Cabrera and his agent about a potential contract extension around the All-Star break, around when the supposed drug test happened. Instead of signing an extension, the Giants suddenly announced that they would continue discussing an extension in the offseason, which seemed a little abrupt and unexpected. Perhaps the Giants found out about the positive drug test and wanted to wait to see if it resulted in a suspension before an extension was signed. If a suspension was never announced, maybe the Giants would decide to re-sign him, and vice versa. According to Victor Conte, the founder of BALCO who went to prison for steroid distribution to MLB players, Cabrera is not alone in using performance-enhancing drugs, but he is one of the few that will actually be suspended for it. Conte estimated that about half of all MLB players use some type of performance-enhancing drugs. Based on those odds and the low number of suspensions handed out, the Giants could have perhaps had an incentive to wait and see, regarding Cabrera’s possible contract extension.

The loss of Cabrera for the rest of the season will force the Giants to step up more than they ever have this season. They are going to have to play near perfect the rest of the season to compete with the Dodgers for the NL West title. Cabrera did not seem like a guy who would use PED’s. He seemed too kind and grateful to be one of those players, but, unfortunately, that is not the case. The Giants are still probably in shock about his suspension, but they need to get over this quickly and start winning games more consistently. As Hensley said, it’s one thing for the players to say that they need to step up without Cabrera, but actually doing it and executing, that’s a whole other ballgame.