The Golden State Warriors have ditched their plans at building an arena on Piers 30-32 in San Francisco, and they’ve found a new site for their proposed arena. The Warriors reached a deal with salesforce.com to purchase land in San Francisco’s Mission Bay neighborhood, where they will build their sports and entertainment arena.

According to Warriors.com, this new arena will be built on 12 acres of private land and will hold about 18,000 seats. In addition, there are already 9,000 existing parking space at Mission Bay. The lack of ample parking was one of the drawbacks to Piers 30-32.

Another positive aspect of the Mission Bay site is its easy access to public transportation. Mission Bay is located within a few blocks of Caltrain, and it borders Muni’s 3rd Street Light Rail, which provides an easy connection to BART.

Both Joe Lacob and Peter Guber, the Warriors’ owners, spoke to Warriors.com about Mission Bay.

“We believe Mission Bay is a perfect fit,” said Joe Lacob, Co-Executive Chairman and CEO of the Warriors. “It is a wonderful inland site in a dynamic part of the City that is convenient for fans from all over the Bay Area. We are buying private property, but the city will also get a new 5 ½ – acre waterfront park. It’s a win-win for everyone.”

“We’ve said all along we wanted to create a spectacular cultural destination for the City and the entire region,” said Co-Executive Chairman Peter Guber “This is about a shared cultural experience: going to a beautiful and inviting place to see a game, see a show, attend a convention. It will be easily accessible, state of the art, digitally fit, and second to none.”

Rick Welts, the President and COO of the Warriors, also spoke to Warriors.com about what the Warriors learned from their experience with Piers 30-32, and he shared his excitement about the new plans for the arena at Mission Bay.

“We’ve spent the past two years listening. We’ve learned a lot. We’re proud of the plans we’ve put forward to date, and we’re thrilled to announce this great leap forward,” said Rick Welts, President and COO of the Warriors. “We are looking forward to engaging with the neighborhood and, ultimately, making this site ‘Warriors Ground.’ This is our path to San Francisco.”

A state-of-the-art arena on Piers 30-32 would’ve been picturesque and quite a tourist attraction. However, the benefits of an arena at Mission Bay far outweigh the costs. 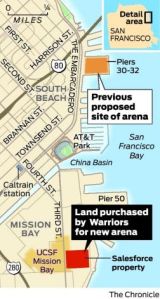 At Mission Bay, the Warriors will face less opposition and fewer regulatory barriers. In addition, Lacob and Guber have said that this arena will be entirely privately financed, meaning it will not be funded by taxpayers and will use no public land. This is rare for a sports venue.

Mission Bay is also closer in proximity to public transportation, there’s more parking readily available, and a 5.5-acre bayfront park will be built in addition to the arena, as part of the redevelopment plan for the Mission Bay area.

In a recent article by the San Francisco Chronicle, San Francisco Mayor Ed Lee called this new plan for the Warriors’ arena a “catalyst for development in the neighborhood.”

Former Mayor Art Agnos, who was opposed to the Warriors’ proposed arena on Piers 30-32, also showed support for the new plans in the same Chronicle article.

“This is a historic victory for the people of San Francisco because we have protected our precious bay and waterfront, as well as gained a new hometown basketball team,” Agnos said.

A specific groundbreaking date hasn’t been set yet, but the Warriors plan on opening the new arena for the 2018-19 season.

Watch the video below to learn more about the project: