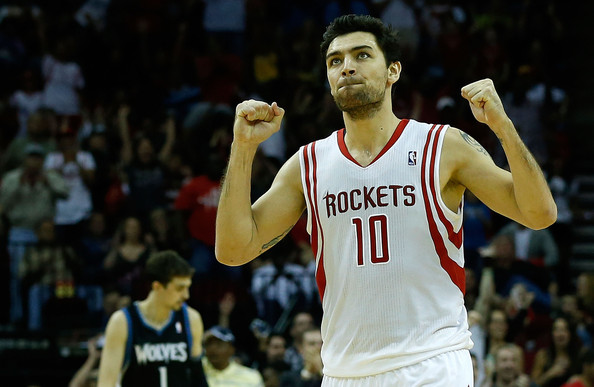 When NBA Free Agency opens on July 1st, the Golden State Warriors should try to increase the depth of their roster. According to Tim Kawakami of the San Jose Mercury News, the Houston Rockets plan on declining Carlos Delfino’s $3 million team option for the 2013-2014 season, which means Delfino will be a free agent. It’s not clear yet which teams will have the most interest in him, but should the Warriors try to acquire him?

Delfino will most likely be a cheap option as a free agent, but, with that said, the Warriors don’t exactly have a ton of money to spend. Carl Landry has opted out of his player option with the Warriors for next season, so he’ll probably receive a multi-year deal from another team. If the Warriors make a hard push to re-sign Jarrett Jack, it doesn’t seem like they will have any money left to acquire a player like Delfino, even if he doesn’t cost much. Hypothetically, let’s assume the Warriors have the cap space to sign him. Would Delfino be a good fit for the Warriors?

Delfino is listed at 6’6″ and 230 pounds. Given his size and frame, he is able to play shooting guard, small forward, and even power forward sometimes in small ball lineups. His versatility would be a significant asset off the bench for the Warriors.

Delfino is a good three-point shooter, so he would allow the Warriors to spread the floor even more and take advantage of their already stellar three-point shooting. He also plays pretty decent defense and can come up with a steal every once in a while, so, given his wide range of skills, he could be a nice addition to the Warriors’ bench.

Given how many young players the Warriors have, he also would provide a quality veteran presence off the bench as well. Delfino has played seven years in the NBA so far, and he has played for the Detroit Pistons, Toronto Raptors, Milwaukee Bucks, and Houston Rockets. He also has played in 41 playoff games in his career, which would certainly be a valuable asset to a team who has limited playoff experience.

The Warriors already have several small forwards, such as Harrison Barnes, Brandon Rush, Draymond Green, and Richard Jefferson. However, if the Warriors are able to get rid of Jefferson’s expiring contract in a trade, Delfino could be a great addition to this team. Also, if the Warriors aren’t able to re-sign Jack, the Warriors will need to add more depth to their roster in order to make up for some key reserves. Given the structural and financial limitations that the Warriors have, it doesn’t seem likely that they’d acquire Delfino, but if given the option and the right situation, he might be a solid veteran, versatile player to add to this young roster.