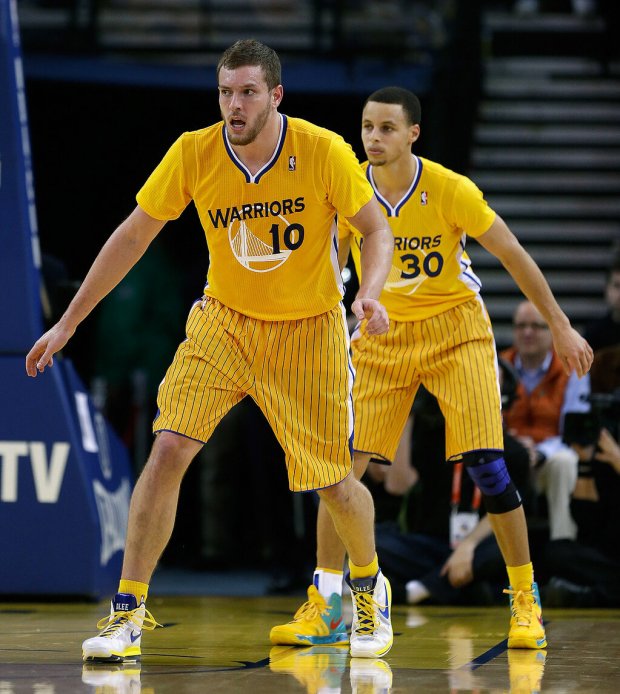 In case you missed it, the Warriors debuted their new alternate uniforms in their home game against the San Antonio Spurs on Friday, February 22nd. These new uniforms are the first modern short-sleeved jerseys in the NBA. On February 11th, the Warriors held an introductory press conference with Lawrence Norman, the vice president of adidas global basketball, Rick Welts, the Warriors’ COO, rookie Harrison Barnes, and Head Coach Mark Jackson. If you’d like to watch the press conference, click here. Some of the main points that were highlighted in this press conference were:

1) The new uniforms show the Warriors’ commitment to being innovative and stylish.
According to the Warriors and adidas, the new uniform is made from 60% recycled materials, dries twice as fast as other jerseys, uses lightweight stretch woven fabric in the shorts, and uses 360-degree stretch fabric in the armhole and shoulder of the sleeves to allow for maximum movement and range of motion. The new uniform is also 26% lighter than the Warriors’ current uniforms. Are they really stylish though? Let’s be honest here. They’re not the prettiest pieces of clothing to look at. First of all, the yellow on the shirt is different than the yellow on the shorts, seen in the pictures below. The shorts are technically “gold,” but, regardless, it looks like the players are wearing shirts and shorts of different brands that use different versions of yellow. Or that the player got dressed in the dark. It looks wildly unprofessional and unfinished. So, how does that equate to style? I’m not sold. Also, you know what would make the jerseys even lighter? No sleeves! The new uniforms could stay sleeveless, but still use the new lightweight fabric that adidas wants to show off. They could’ve made super lightweight tanktops like a track jersey or something. That would’ve been “revolutionary,” but still “stylish” and not the latest laughing stock of the NBA.

2) The Warriors organization is confident that fans will love the new uniforms, and the uniform was designed with the fans in mind.
First of all, through some simple observations on various social media websites and of comments made by fans on the official photos and blogs the Warriors have posted about the new uniforms, I’ve noticed the majority of fans don’t like the new uniforms and think they’re ugly. A lot of fans don’t like the sleeves and find it somewhat embarrassing actually. So, strike one for the Warriors organization. Although it’s great to see adidas strive to be as progressive as possible in terms of uniforms, the adidas Revolution 30 uniforms are very expensive also. A swingman Revolution 30 uniform is $105 compared to a normal swingman jersey, which is $90 at the NBA Store for the road jersey, and $60-$70 for the home jersey. The new uniforms, because of the new, progressive technology, is $110. Strike two for the Warriors organization. Maybe my point of view is slightly biased because I’m a college student, but that is way too expensive. Spending $90 or $100 on a jersey is already a lot, so why would a fan spend $110 on a sleeved jersey that isn’t even that popular? An overly expensive jersey doesn’t exactly seem like a product designed with fans in mind.

4) The NBA is the only major sport that doesn’t have sleeved uniforms, so this new uniform is a way to be revolutionary and progressive.
Excuse me if my upcoming explanation is painfully simple or obvious, but the NBA has been using sleeveless jerseys because it makes it easier for players to shoot, rebound, defend, dunk, etc. Am I being too logical right now? There’s a very obvious reason why the the NBA doesn’t have sleeved uniforms. It’s not some kind of silent protest to sleeves. Harrison Barnes and other members of the Warriors claim that the sleeves don’t impede their shooting motion because it’s so light, but I’m convinced that sleeveless jerseys still give a player a little more motion and flexibility. However, this isn’t the main issue about this statement by the Warriors. How is it being “revolutionary” or “progressive” to conform to what every other sport does and has been doing for a long time? Why would an NBA team want to conform to using a sleeve? Maybe I’m missing something, but I don’t see how it’s innovative to use a sleeved jersey, in order to be like every other sport. The NBA used sleeved jerseys a long time ago, so it’s not like this has never been done before. Revolutionary and innovative? Not so much.

The whole marketing of this new jersey has been extremely flawed. The portrayal of the benefits of the jersey has been somewhat effective, but the style and the initial notion behind the jersey is completely wrong. Since these jerseys are the Warriors’ alternate jerseys, fans won’t have to see them too much during the season, thankfully. However, I wish the Warriors organization was more tactful when they designed these jerseys. There are obvious flaws and in an attempt to keep these jerseys hidden and surprise fans, they completely forgot to ask fans in the preliminary stages if they even liked them in the first place. I think with some tweaks (most importantly, matching the yellows), these jerseys wouldn’t be too bad. Great endorsement, right? However, if the Warriors truly are the Bay Area’s team and if the Warriors organization does really want to please the fans with this jersey, they would’ve come up with a much better design with input from the fans. That would’ve been a fun, interesting social media campaign that the Warriors could’ve run. Unfortunately, this is strike three for the Warriors organization. The new uniforms are out, and they’re not looking good.