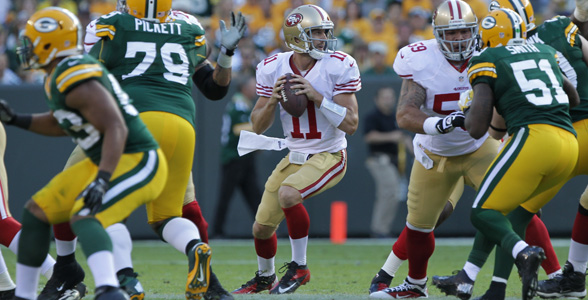 Pardon the almost incessant alliteration used in the title, but speaking as a Giants and 49ers fan, yesterday was pretty much the perfect sports day. The Niners kicked off “Super Sunday” with a 30-22 win over last season’s MVP Aaron Rodgers and the Green Bay Packers. Alex Smith completed 20 of 26 passes for 211 yards and two touchdowns with no turnovers. Smith earned a 125.6 quarterback rating, which is quite impressive compared to Rodgers’ 93.3 rating. Also, David Akers converted a 63-yard field goal at the end of the first half, which tied him for the longest made field goal in NFL history. The 49ers went into the fourth quarter with a 23-7 lead, but they knew their lead wasn’t secure while facing one of the best offenses in the league. Thankfully, the 49ers boast one of the best defenses in the league, so the fourth quarter would prove to be quite a battle. “It wasn’t perfect by any means,” Smith said, “but good team football, everybody helping each other.”

The Packers got back into the game off of a 75-yard punt return touchdown by wideout Randall Cobb. The Packers followed with a two-point conversion, and, suddenly, they were back in the game. At this point, the defense stepped up. NaVorro Bowman intercepted a pass thrown by Rodgers, which provided a big change in momentum. “We fought to the end,” Gore said. “Our defense made plays when they had to.” The Niners offense then took over and on the very next play, Frank Gore ran 23 yards to give them another touchdown. The Niners went on to preserve their lead and eventually win a great battle. “Really proud of our guys,” Harbaugh said. “They played with a lot of fight, a lot of heart, and a lot of courage.”

The other half of “Super Sunday,” the Giants vs. Dodgers game at AT&T Park, proved to be just as exciting for the fans. It was supposed to be a Barry Zito and Clayton Kershaw matchup, but Kershaw was scratched right before the game with a minor right hip injury, even though he said he could’ve pitched. Joe Blanton was the replacement starter for the Dodgers, and the Giants have had good luck against him in the past. In his last 11 outings against the Giants, Kershaw has a 7-3 record with a 1.21 ERA. The Giants surely were glad that they didn’t have to face Kershaw, even though, out of respect, none of them fully said that. “He’s one of the best pitchers in the game,” Bochy said. “We haven’t done a lot with him.” In fact, Zito ended up being the star of this game. He pitched 6 1/3 innings, allowed four hits, and no runs. Bochy praised Zito’s concentration and Buster Posey credited Zito’s confidence as reasons why he was so effective. Giants fans have started to believe in Zito more, giving yet him another standing ovation when he came out of the game. “The atmosphere tonight was probably more electric than I’ve ever seen,” Zito said.

Hunter Pence drove in the first two runs of the game off a two-out double in the first inning. “It’s about picking each other up,” Bochy said. “Those two-out hits win ball games for you. It helps guys relax.” In the fifth, Angel Pagan had his 11th triple of the year, one shy of the Giants’ season record, and Marco Scutaro drove him in with a perfectly executed sacrifice fly to make the game 3-0. In the sixth inning, Posey led off the inning with a great at-bat against Blanton. In the 12 pitch at-bat, Posey fouled off six pitches then concluded the at-bat with a big home run to center field to make the score 4-0 Giants. Posey really bolstered his MVP campaign this weekend as he displayed immense talent on both offense and defense while on national television. “With what he’s done for us — here you have a guy who is your catcher and is hitting cleanup and he’s carried us at times,” Bochy said. “I can’t think of a guy more valuable for a club than Buster is for us.”

The start of the NFL season is one of the best days of the year for many fans. September baseball always showcases drama and intense competition, especially when watching the Giants. San Francisco sports fans were in for great sports action all around on “Super Sunday.” The Niners proved to all of the NFL that they are once again a contender, and last year’s success wasn’t a fluke. The Giants solidified their lead in the NL West and sent a message to the Dodgers that if they want to get into the playoffs, they’re going to have to go through the wild card. Both teams appeared dominant and more confident than ever, which was great to see as a San Francisco sports fan.