It all started when MLB told Brian Wilson that he couldn’t show too much orange on his cleats. This was such an absurd claim, especially since MLB claimed that the hitters that Wilson was facing were “distracted” by the immense amount of orange on his cleats. The reason why these particular hitters might have been slightly “distracted” could be that Wilson throws 98 mph fastballs, which breeze past most competent hitters. I severely doubt that his shoes were at all offensive to the hitters. MLB required that his shoes be 50% orange and 50% black. This sounds amusing, but sadly, this is actually what was required by the league. Again, so absurd. As a form of mockery, Wilson “Sharpie-d” 50% of the shoes so it was a more “balanced” shoe.

Once he started to grow out the beard, Wilson decided to continue the trend of mockery. Wilson decided to use the “Just For Men” treatment for his beard, just to ensure that 50% of his hair was black. Wilson refused to admit to this, but it was quite obvious that he was making a statement. And it was a funny one. It was a proverbial slap in the face directed at MLB. Wilson proved to be an extremely effective closer down the stretch, so fans created the “Fear the Beard” trend. It became a national story and fans started bringing “Fear the Beard” signs on all Giants road trips. “The Beard” became a symbol for the 2010 Giants team and all the weirdness that defined it. “The Beard” was the perfect representation of the sense of hope, perseverance, and humor that this particular team exuded.

As a diehard Giants fan, I’ve got to say that “The Beard” became more than just a funny story for the Giants during the 2010 season. “The Beard” became the national symbol for all the outcasts and misfits on that team. This team had all the possible quirks, yet everyone truly believed in them. At the beginning of the 2011 season, “The Beard” became bigger and more exaggerated. Wilson refused to let it go. The reason why wasn’t exactly clear, but it could be that Wilson was superstitious or he just really enjoyed being a trend setter. Also, fans still seemed to enjoy it. 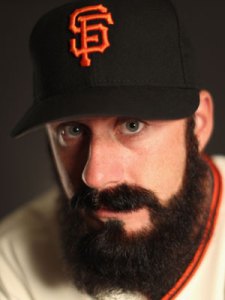 I can maybe understand why Wilson would keep his beard for the 2011 season, because all athletes have a form of superstition, so he could have thought that “The Beard” could lead to another World Series title. Everyone knows how the story of how the 2011 season ends, so there’s no point on dwelling on it. Clearly, his beard’s “magical powers” don’t exist, so what’s the point of keeping it? Wilson loves his new fame, and “The Beard” certainly brings him lots of attention and adoration. Wilson has become quite the fame whore, especially since he has starred in two commercials this summer. The first was in a Taco Bell commercial:

Some fans might find these commercials amusing, but I find them overly exaggerated and just annoying. “The Beard” is no longer the symbol of hope. It has become an overplayed, overused act that is no longer funny and no longer relevant. Brian Wilson needs to shave the beard not just because it’s not funny anymore, but in a sense, it would be a way for him (and the team) to move on from the torture that was this past season. New trends and new traditions can be started this upcoming season, because the Giants are an entertaining, creative team. There really is no point in keeping the beard anymore, except for purely selfish reasons on Wilson’s part. The Giants don’t need a beard to win. It clearly didn’t help this season. Wilson must be keeping the beard around because he loves the attention he receives and the fame that comes with it. “The Beard” started off as a humorous way to bring together the players on the 2010 Giants team, but now it doesn’t do any good for the team and is simply a publicity stunt. The Giants need to move on from the 2011 season, and if Brian Wilson shaved his beard, it would show that the players mean business and are serious about repeating their World Series title.