On opening day of the 2011-2012 season, the 49ers were hoping to play dominant football on both offense and defense. As if continuing the trend from the last season, the 49ers played excellent defense and struggled much more on offense though. The defense allowed no points in the first half and seemed to really bother Tavaris Jackson’s (the Seahawks QB) rhythm. The offense scored no points in the first quarter, but was able to get 3 field goals and Alex Smith was able to dive into the endzone for a touchdown at the end of the second quarter. It appeared as though the 49ers might be able to pull off a win with a 16-0 lead at halftime.

At the beginning of the third quarter, the Seahawks were able to get their first touchdown after a nice pass by Tavaris Jackson to Doug Baldwin on a 3rd and long conversion. After a field goal by the 49ers and several nice scoring runs by the Seahawks, they had cut the deficit to 19-17 with 3:56 left in the game. This game was no longer going to be an easy win for the 49ers, so they really needed a burst of energy. That is exactly what they got from Ted Ginn.

The Seahawks were kicking off and Ted Ginn was receiving the kick. He caught the ball in the endzone and ran 102 yards down the right sideline to return the kickoff for a touchdown. Talk about an energy boost. This made the crowd go absolutely wild. This put the 49ers up 26-17. Three plays and less than a minute later, Ginn was able to return a Seahawks punt for another 55 yards and another touchdown. 33-17. Game over. That was exactly the ending the 49ers needed.

Donte Whitner, one of the new safeties for the 49ers, went to high school with Ginn at Glenville High School in Cleveland. Whitner said, “Teddy’s been doing that stuff since high school. If you don’t get to those types of guys on special teams, they’ll break loose. All you need is a little room with world-class speed. I don’t know many people who can catch him once he sees the end zone.”

Watch highlights of the game here by clicking on the thumbnail: 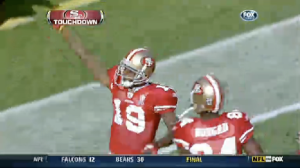